Admit it: you’ve walked past stores in the city or your local shopping centre that have dubious names like ‘World of Wizardcraft’ or ‘Warhammer 10000’. You may have observed with curiosity the black t-shirted young men rolling dice and yelling cries of victory around tables loaded with figurines through shopfront windows. It’s entirely possible that you may have chuckled or made judgements about geeks or nerds at this point.

Difference is easy to make fun of. Discerning similarity or difference – and being judgey-wudgey – is a part of being human. But just because something is foreign – like those mysteriously gesticulating people in the games shop – doesn’t make it bad. And if you’re anything like me, you may eventually push past your rejection of the foreign and become curious about the other worlds people inhabit.

Reader, I attended a role-playing games convention over the past weekend. Have I ever attended one before? No. Have I ever played a role-playing game? Never! Was I nervous about throwing myself into the deep end of a niche subculture many consider scary? Yaaasss. But I’m not one to let trepidation block my intuition for an adventure, so away I went.

Reader: this roleplaying games convention gave me more insights into business leadership and supportive management than any conference book I’ve read to date.  I suspect that accessing this kind of learning was why I so wanted to attend the convention. I mean sure, I enjoy playing games and am open to collaborative play with others. But I’m also deeply curious about what great, respectful leadership looks like. I feel that I regularly see examples of poor leadership rather than brave, purposeful leadership and collaboration. Here are my takeaways from Arcanacon 2019: there is so, so much that organisations of all sizes can learn from role-playing about leadership, diversity and respectful inclusion. 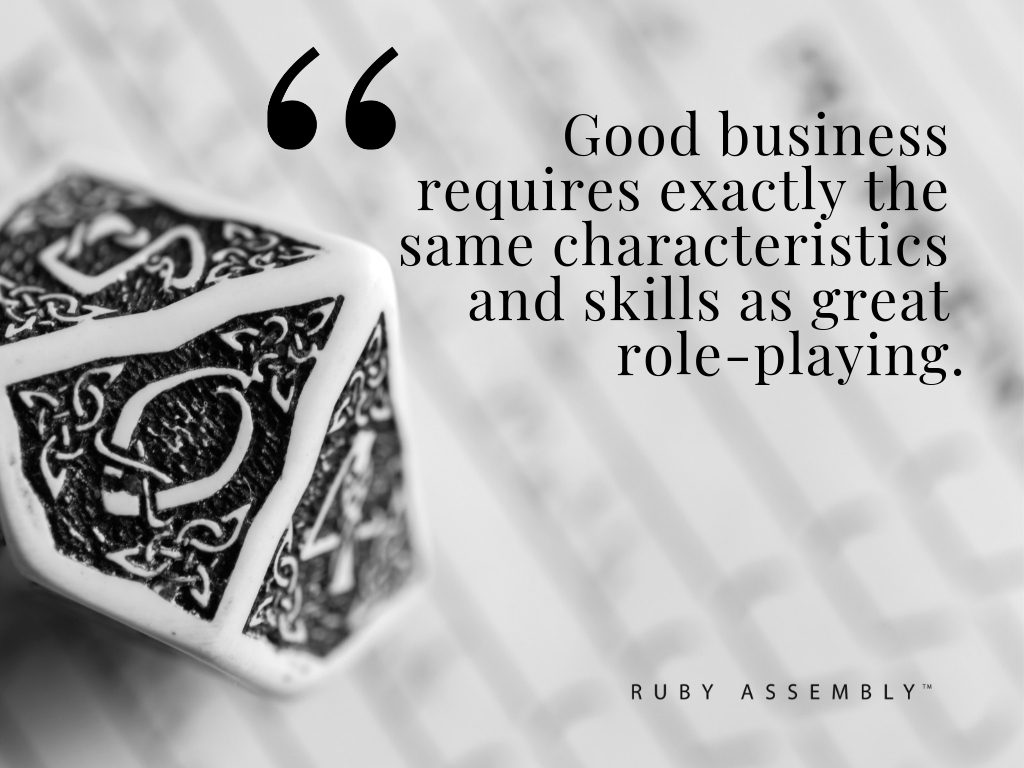 A Respect for Diversity
When I approached the stairs at the convention, I won’t lie: I felt like a fish out of water. The audience was probably 85% blokes, many of whom were in black t-shirts, many sporting beards or tied-back hair. We lined up for our convention lanyards, and I took a moment to notice there was actually much more diversity in the group than I first noticed. In fact, the group was a more diverse subsection of the community than I would see on the high street or in a board room. The crowd had an incredible diversity of body types and physical abilities. There were members of the trans community. A variety of ethnic groups were present, and I’m certain that a variety of sexual orientations were present. I saw kids and old people. And lots of people that probably felt shunned by society because of their ‘otherness’ or ‘strangeness’.

Role-playing is at one and the same time an incredibly safe space and an emotionally vulnerable space. The reason I imagine it attracts a diversity of unique people who don’t fall into neat social categories is because role-playing focuses on looking beyond the physical, and engaging with who the person is – or what the person’s ideas are – beyond the immediate impression they might make. When you’re role-playing, your body and its capability, your sexuality, your gender, your ethnicity, your social mobility and your wealth – they’re all immaterial.

Respect for diversity is built into the structure of role-playing as an activity, with Arcanacon displaying rules addressing bullying, inappropriate behaviour and ways that these issues would be handled should they arise. This respect for the individual was further cemented by pronoun stickers that allowed people to identify as ‘he/him’, ‘she, her’, ‘they/them’ or to choose no pronoun at all.

Can you imagine how different businesses, organisations and governments might be if they championed such otherness, and asked people how they should be communicated with? Instead of battling to fit into social norms, teams could instead focus on contributing meaningfully and participating in environments that respected who they truly were.

Make No Assumptions
During role-playing games, nothing can be assumed about your fellow adventurers. Men may not wish to have male characters. Women may not wish to play female characters. Unions or marriages in the world you explore may not exist, or they may be entirely same-sex. Society may be matriarchal. In short: all our known systems of power can be thrown out the window. The creative vortex this breathing space leaves is incredibly freeing. Who knows what better solutions may appear when we remove the assumed boundaries of our business, organisation or society? 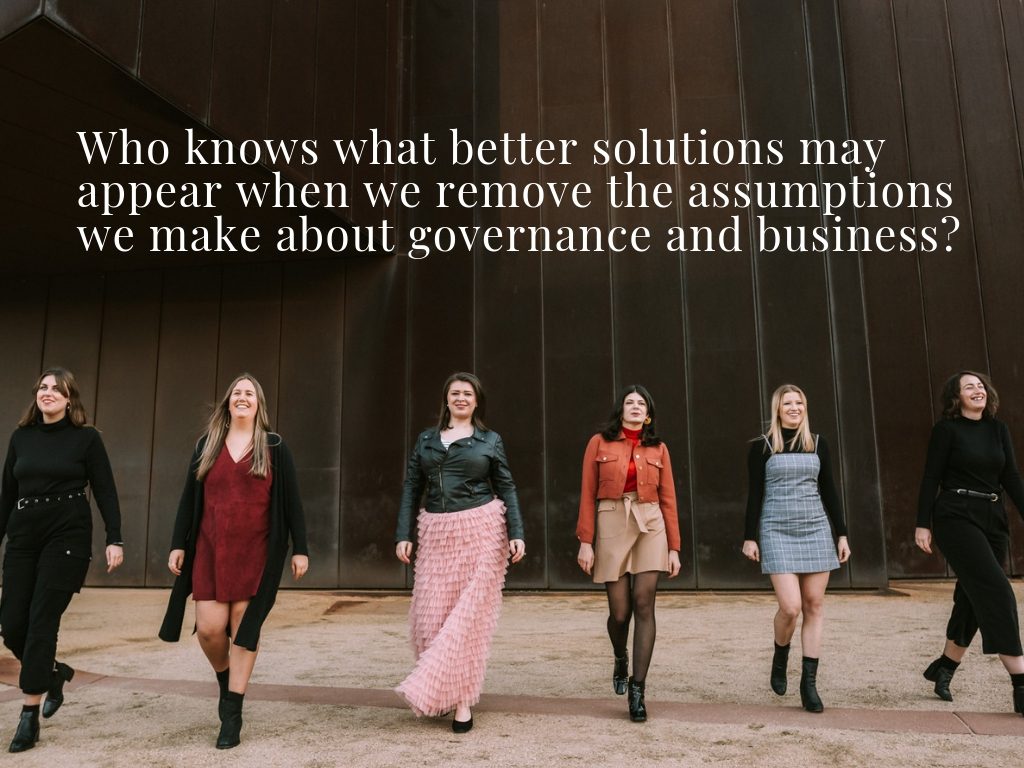 Setting the Rules Together
As role-playing is best understood as collaborative improvisation with thematic boundaries, players determine the tone of the story they create together. In one game I played, we decided as a team if we wanted our story to be serious and historically accurate, or if we wanted a romantic comedy. If we wanted, it could have featured magical elements, or it might have been a farce. As a team, we chose the kind of story we would tell – facilitated by our game master (they’re the manager of the game, keeping things on track).

Permissions also come into play during the game itself: there were pieces of paper with ‘x’ on them placed within easy reach of each player. If at any point we did not like the direction or tone a story was going in, we could press ‘x’ and the scene would restart. Players are under no obligation to stay at the table any longer than they want, and should they press ‘x’ they are under no obligation to explain what has triggered them, or why they’d prefer not to go in a particular direction.

This is an incredibly respectful safeguard. It makes me think of Brene Brown’s approach to ‘rumbling with vulnerability’ in Dare to Lead, where colleagues set their rules for the meeting. How empowering. Can you imagine how much less anxiety-riddled and more productive meetings would be in your world if people could press ‘stop’, take a break, or move away from subjects without social repercussion or disapproval?

Wow. Might you imagine a more productive environment to begin learning how to recognize self and other? Can you envision how much healthier a corporate culture would be if people were honest about their capacity, or the realities of their position? They could avoid jumping higher and higher to reach arbitrary KPIs, and begin working together to make things better and serve clients. In role-playing, your aim is to work together to progress the story. That means you cannot relentlessly reject your fellow-player’s suggestions. You can adopt an idea, or negotiate around it in a way that moves things forward. Role-playing is not about blocking opportunities for improvisation, or passing others’ boundaries without permission. Good business requires exactly the same characteristics, and most of the same skills. Now that I’ve participated in role-playing, I would unequivocally recommend it as an ideal way to participate in and observe respectful leadership in action.