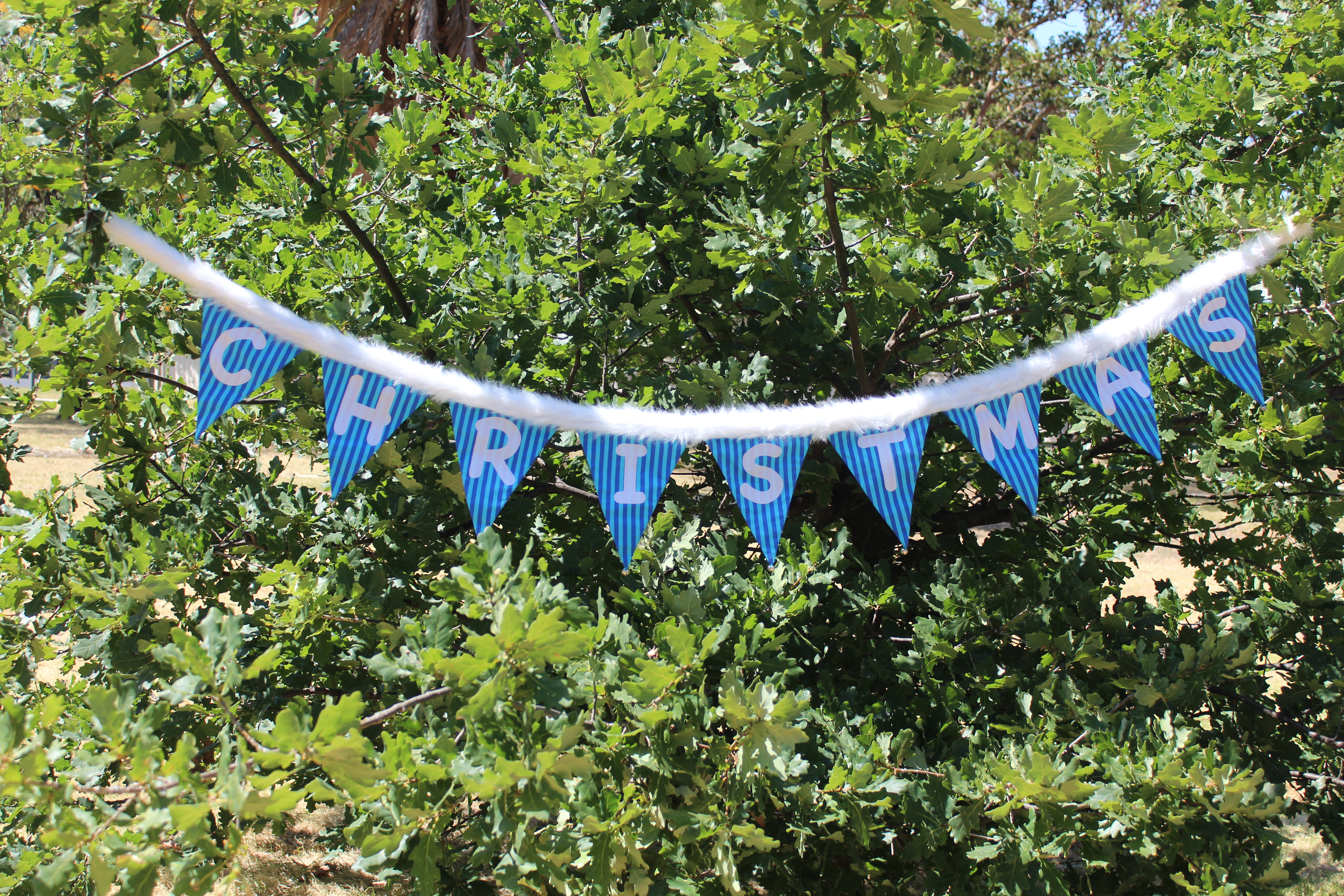 Ho ho ho! Feeling Christmassy yet? The second in Ruby Assembly’s ‘My Christmas’ interview series features the physical embodiment of Christmas spirit in the North – Deanne Wild from Wild About Melbourne and Made ‘n Thornbury. Deanne came to our interview in a friendly Reservoir Park replete with Santa hat and elven-earned dog, Wogan, in tow. As Deanne says … ‘It’s Christmas, or nuthin’!’
Don’t forget to read our first ‘My Christmas’ interview here.

When you were little, what used to happen when you woke up on Christmas morning?
D: Nothing much has changed, really. I’d wake up at 5 am on Christmas morning – it happened when I was little, it still happens today. I put on my Santa suit, and then I attempt to wake up everyone in the family. Mum’s onboard, everyone else takes a little longer to stir. For me, it’s always been about being up early on Christmas morning – you’d go to bed after having watched Ray Martin and Carols by Candlelight. It’s changed from having a glass to milk to now having several glasses of champagne. My Mum – bless her – still waits for us to go to bed before she puts out all of Santa’s presents. Nothing has really changed since I’ve been little! 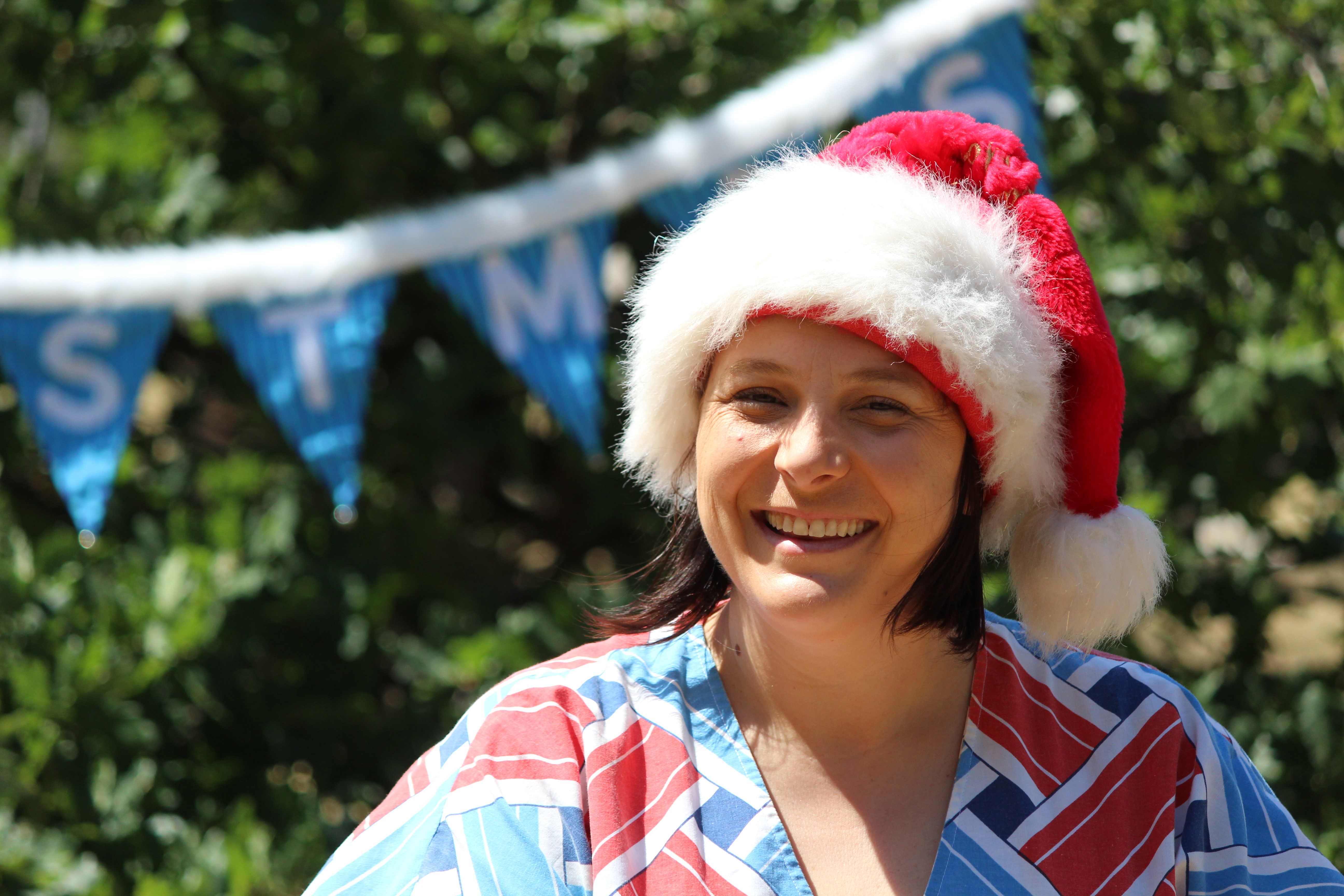 Where does your love for Christmas come from?
D: I think it’s the legacy of my Grandma, her name was Linda. We called her Ma: she was that excited about Christmas. She was as excited as the kids, and she always made sure she sat on the kids’ table. I think that sense of enthusiasm was passed down from her.
Are there any Christmas traditions that happen ever year for your family?
D: We have a pretty textbook Aussie Christmas. It was always at my Grandmother’s house until her last Christmas with us. Don’t even mess with it: it was always there. No matter what anyone else was doing, that was the deal. Prawns to start, presents, a full Christmas dinner with turkey, ham – the works, cricket and then plum pudding. I make the plum pudding every year to Ma’s recipe. As we’ve all gotten older, it’s gotten longer, louder and rowdier.
That’s great! That’s a wonderful Christmas progression! Do you think the enjoyment of Christmas is due in part to how content a family is?
D: I’ve gained an appreciation for the fact that my family really like each other. I hear a lot of people say they love the build-up, or the random celebration with the neighbours, but that the day itself with family is too stressful. We have it really good: we don’t have to go to seven different places and we all get along. My partner doesn’t love Christmas, and I think that’s to do with it having been a chore for her. 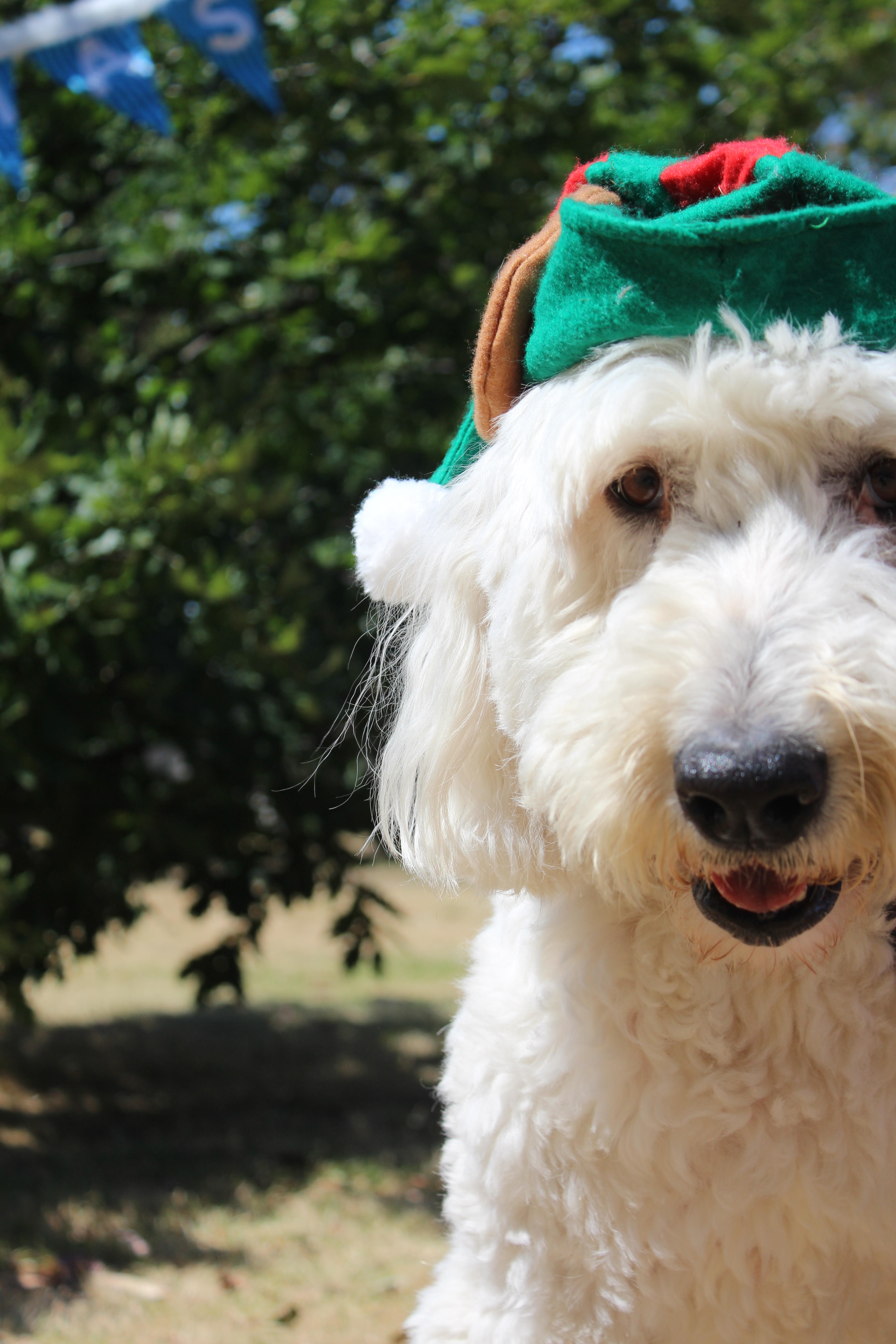 Few people feel nothing about Christmas: they’re either into it, or they dislike it. As I’ve gotten older and I have a partner, Christmas leaves me with a sense of compromise: of not getting what I want because of family loyalties being stretched and divided. Is Christmas a season that involves compromise for you?
D: My partner’s family is in the UK, so it’s not an option that we do both. I’ve never had to do the whole ‘where are we spending Christmas’ argument?  As much as my partner says she doesn’t like Christmas, she does enjoy it. At some point I will get to host Christmas – but it’s so far down the track it doesn’t bear thinking about. I do remember at my Ma’s funeral in July, my cousin – who was about 12 at the time – got really emotional. He said ‘What happens to Christmas now?’
That’s a beautiful association with your Ma.
You run a series of craft markets that specialise in Christmas gifting. How do you feel about Kris Kringle versus gifts for all? Christmas gifting can be political.
D: Yes, it can! We all buy a gift for everyone, but there’s an understanding that it’s about the thought or the joke, rather than the expense. I probably only spend $10 – $20 on any person. One year we even called it the ‘Dan Murphy Swap’ because we seemed to all buy each other alcohol. It’s about the fun and the thinking of the person, rather than big spending. The present opening might take an hour, but that’s because it’s hilarious. I’m OK with the Kris Kringle as a concept, but it’s not for us. Also, I’m Santa. If there were only 8 presents, that cuts that whole experience down to 10 minutes. No fun! 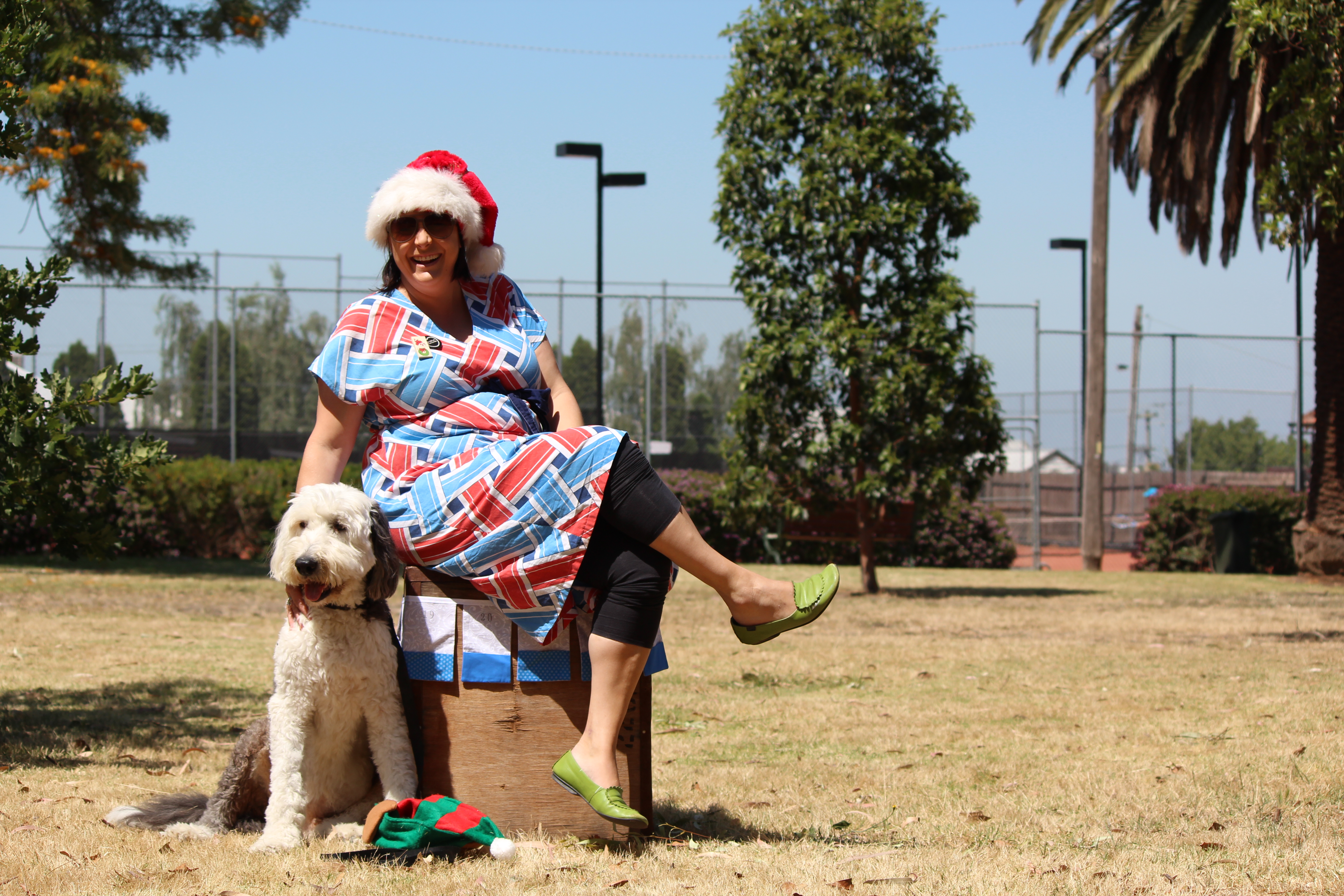 So when does Christmas begin for you?
D: The first of December! That’s when Love Actually comes out. And I refuse to read the blog movies that try to suggest it’s not a Christmas movie. If there are hidden agendas, I don’t want to know about it! I also like listening to  Glee Christmas music while putting up the tree with some wine. In. My. Element. We always try to go to the local carols by candlelight – we normally do the Darebin All Nations one. Take a picnic blanket and drinks and just chill. 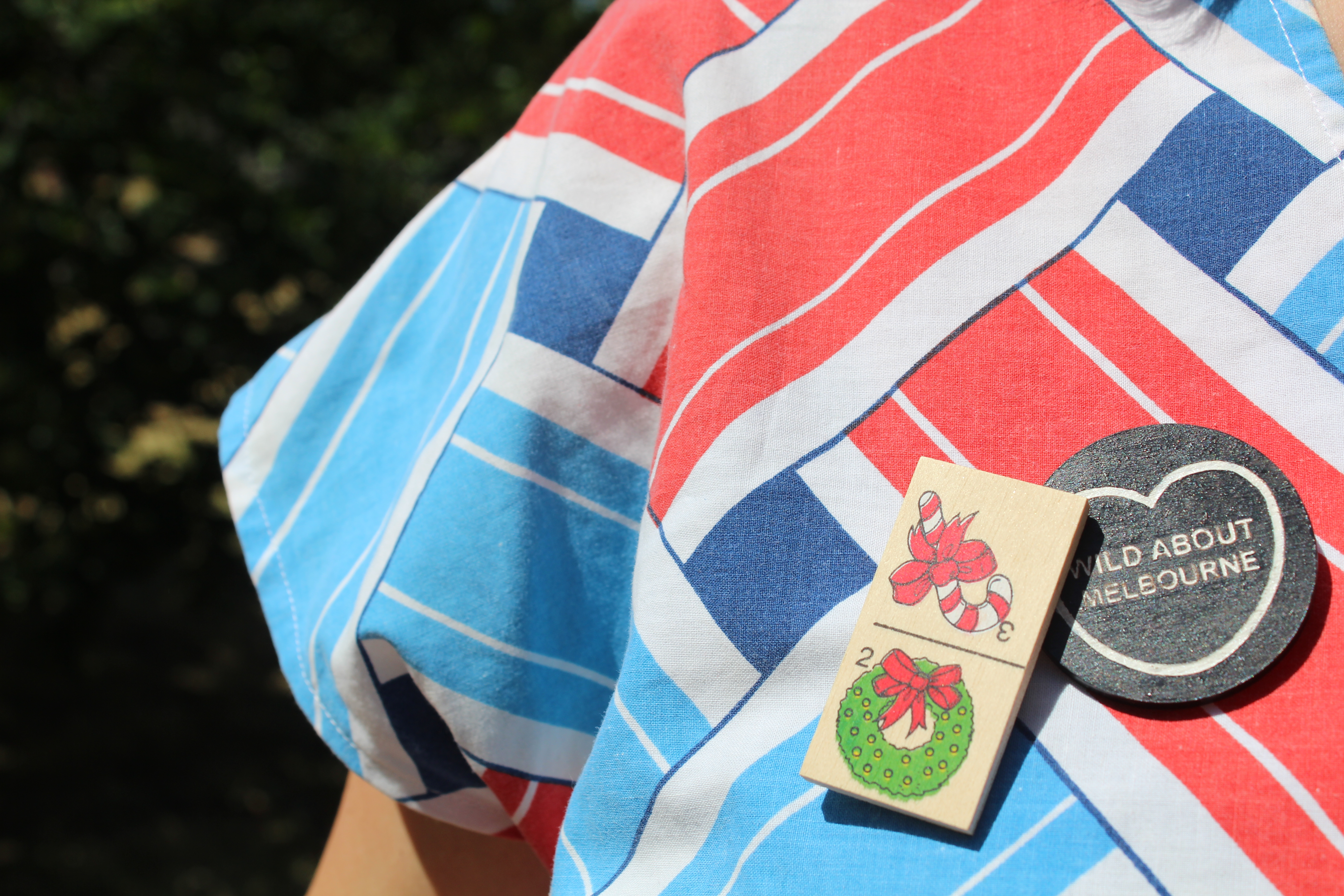 Is Christmas religious for you?
D: We grew up religious, so it used to be about going to church on Christmas Eve and Christmas Day. That all kind of stopped with the passing of my grandparents – we realised that we did it more for tradition than because we actually felt religious.
What is your favorite Christmas song?
D: *pause* Aww it’s hard. Back when we went to church, I’d get cranky if they didn’t sing ‘Away In A Manger’. I really like ‘It’s Beginning to Look a Lot Like Christmas’. There’s not many Christmas songs I don’t.
Where do you stand on MC? I love me some Mariah Carey! Mimi gets what Mimi wants!
D: That Mariah Carey Christmas album is divisive. I remember last year we did a market at the Northcote Social Club, and I asked for some Christmas tunes. On my phone I had the MC Christmas album and put it on, when the bartender said ‘No! There’s only one rule in this establishment! And that is no Mariah Carey Christmas album!’
I think the same goes for Buble.
D: Me too. He’s almost at MC status.
What’s your favorite Christmas food?
D: Plum pudding. We don’t set it alight – it’s just fruit soaked in brand for a week, served with toffee sauce, brandy custard and cream. It’s my favorite. We only have that, and it’s always hot.
What makes you feel the most in touch with the Christmas season?
D: The putting out of the tree starts it off: I think wrapping the presents is pretty important for the Christmas vibe, too. Being a crafty person, it has to be elaborate. I’ve done kooky tags, once I wrapped everything in recycled Melways. Once I drilled holes in shells and wrote people’s names on them as tags. Also I’m thrilled to lay out all the treats I’ve acquired over the year at markets, then decide who gets what. The wrapping night will also feature Love Actually and Rent, too. It’s also Dad asking me ‘will you wrap Mum’s presents’? All that nostalgic stuff. For me, it’s Christmas or nothin’.
That’s awesome Dee. Thankyou so much. I love it when people are enthusiastic about things – particularly Christmas! 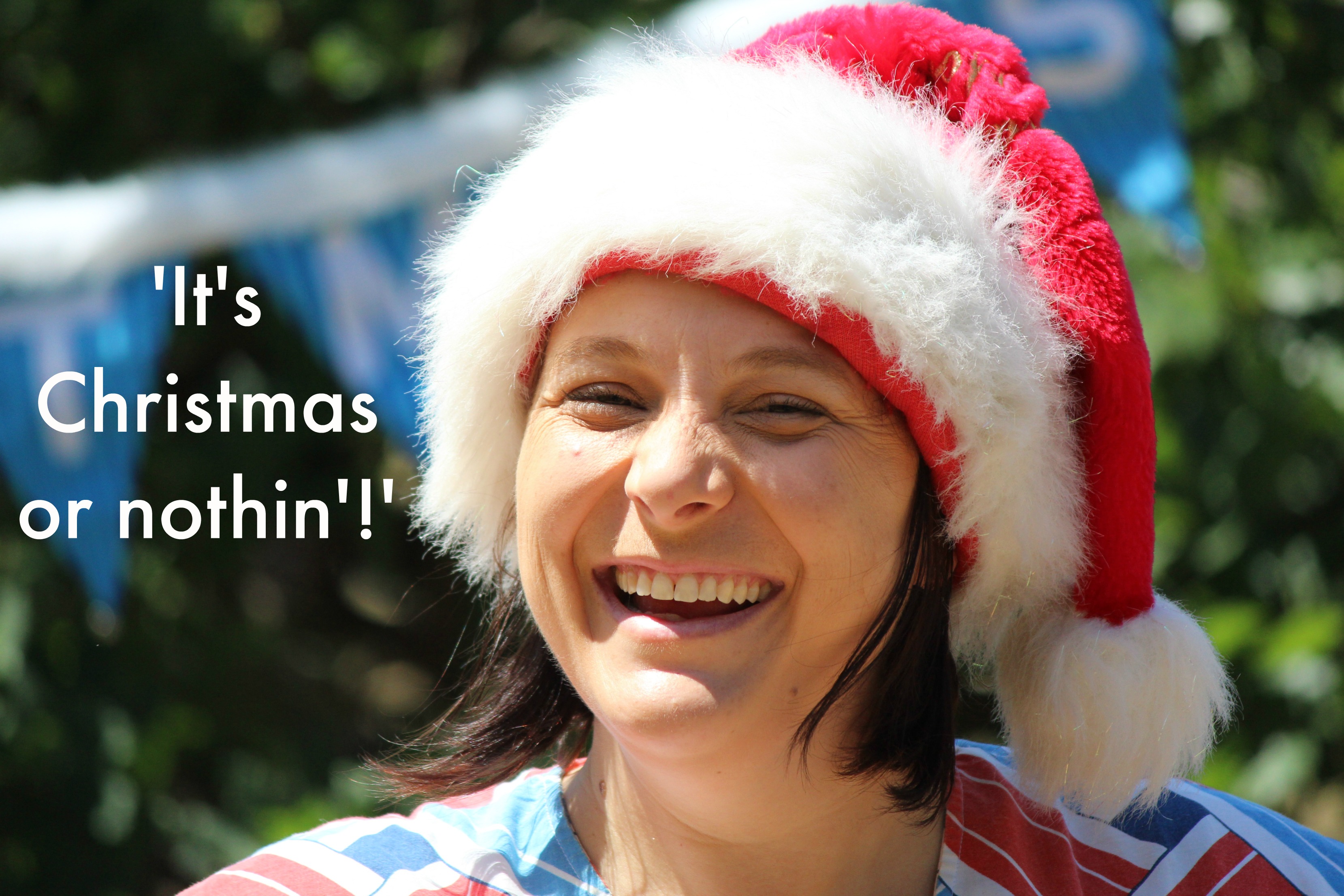